Let’s face it. There are LOTS of EHRs on the market and most of us simply don’t have the time, energy, or frankly – interest – to put a lot of effort into researching them. Some therapists have told me that although they’d sort of like to explore EHRs, they begin looking at all the options, get overwhelmed, and decide to put the whole thing off. Although it doesn’t have to be overwhelming, it IS an important decision. An EHR that’s designed well, with attention paid to usability issues so it’s easy to use, can simplify your life enormously and save you a lot of time and money. On the other hand, an EHR that’s poorly designed will have you pulling your hair out and cursing EHRs in general – possibly not realizing that not all EHRs are the same and that there might be better options.

As a therapist, when I get a new referral, I often suggest the person make appointments with two or three different therapists to help them choose the one that’s the best fit. I explain that it’s too important a decision to be made lightly. Choosing an EHR is a bit the same. My suggestion is to sign up for free trials with two or three EHRs and play with them for a month or so – maybe use real client data or maybe just make up some fake clients but either way, take the EHRs through their paces. Perform the same kinds of tasks you’d be doing as a normal part of your daily routine in your office. After actually working with the EHRs for awhile, you’ll be in a much better position to choose the EHR that’s the best fit for the needs of your particular practice.

However, there’s still the question of how to narrow the field enough to know which two or three EHRs you want to test. The goal of this series of posts is to give you some pointers that should help you do just that. The table below groups EHRs into categories with “Scope” being listed across the top to form the columns and “Type of App” down the side to form the rows: 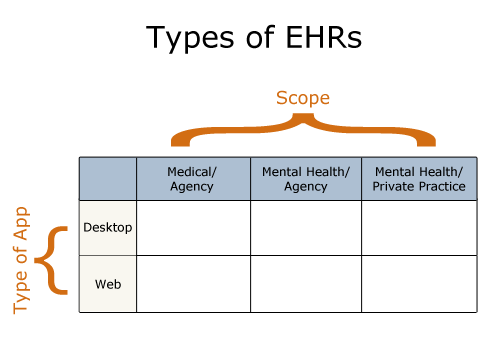 Notice that there are three categories for Scope:

Scope is not about how many people use the EHR; instead, it’s about the types of users for which the EHR was designed. Reading across the top:

As far as which type of scope is best, it depends on the nature of your particular job or practice. Since I’m in private practice, my personal preference is toward a Mental Health/Private Practice EHR. Using any other type of EHR would seem a bit like taking something that doesn’t really fit, and trying to “make it work” for how I run my business. It seems to make more sense to start off with an EHR that’s a good fit from the outset.

Once you decide what scope you want, it can be a bit challenging to tell which EHRs go into which categories. If you contact most any EHR/practice management company and ask them if their product is for behavioral health practitioners in private practice, they’ll give you an enthusiastic, “YES!” But the question is a bit like asking if you can wear snow boots on the beach. Yes, of course you can. But furry snow boots were designed for something entirely different – conditions that are much more challenging and demanding than a stroll along the beach. So although you CAN use medical and/or agency EHRs for private practice, you may not want to. They have many more layers to them than you really need, all of which makes them more complicated and cumbersome to learn and use. Perhaps a better question to ask is whether the EHR can be used by hospitals and/or agencies. If you get a “yes” answer to that, you know that you’re probably dealing with an EHR that falls into one of the first two categories.

Previous posts have discussed the pros and cons of desktop apps vs. web apps and also, safety issues with web apps, so those topics won’t be covered in this post. However, we do need to finish examining the table. Considering both rows (Type of App) and columns (Scope), we have a total of six different categories of EHRs:

These days, almost all healthcare professionals are using the Internet in some way in their practices. Maybe they efile, maybe they store backup files on the Web, or maybe they use the Web to email their clients. Because of this, most EHRs – even those that are primarily desktop apps – offer some form of Web interactivity. Therefore, it may be difficult or impossible to find “pure” examples of some of the Desktop categories – especially the Medical/Agency and Mental Health/Agency types of EHRs. However, the main distinction is where the app itself actually lives – where it’s installed. If it’s on your computer – or the computer(s) at the hospital or agency where you work – it’s a desktop app. If it’s only accessible through a Web browser, it’s on the Web.

As covered in the previous posts, there are many advantages to Web-based applications and very few disadvantages. If you’re in private practice and in the market for an EHR, you may want to check out a few that fall in the last cell of the table, i.e., web-based EHRs that are designed just for mental health professionals in private practice: 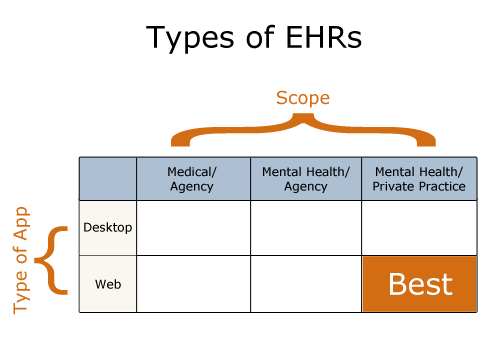